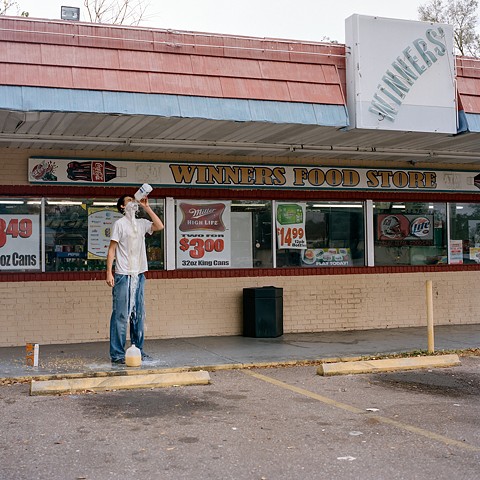 My current work is focusing on the ideas of failure, permanence, transitions, and masculinity. Having grown up as an athlete in multiple sports, the specific societal realm of athletics contains underlying ideals, which can have a dual nature that is positive and negative. Overlapping that is the nature of failure as one is pushed both physically and mentally towards breaking points while subconsciously not permitted to fail.

I have been focusing more on photography and performance, but have used other media such as video, sculpture, and installation. Performance and photography have developed into a working relationship in which they rely on each other. Most performances are viewed as documentation and not as live events and I have been investigating that tension. What are the other forms of communication in this technology-laden society if one removes the two most prominent forms: photography and video? An ongoing series of work I have titled Unseen Performances attempts to tease out the answers to that question. By not allowing anyone to view the performance live, the other veins of experience that performance can have are heightened.